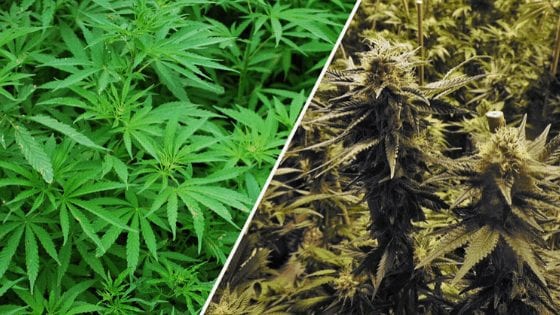 The popularity of CBD products has brought a lot of attention to the distinction between marijuana and hemp. Because these two industries are so closely related, it’s no wonder that so many individuals don’t really understand the differences between the two.

We believe it’s important to bring some clarity and transparency to the debate, and inform customers on the differences and similarities of hemp and marijuana.

Hemp and marijuana are essentially broad classifications of Cannabis that we, as a culture, have identified as being the main type of cannabis. However, that’s not necessarily accurate. Cannabis is an entire genus of flowering plants in what is known as the Cannabaceae family. This family includes three of the primary species you may be familiar with.

The surface distinctions between hemp and marijuana rely on their classifications.

Ok, so what exactly is hemp?

Hemp refers to a variety of Cannabis that contains .3% or less THC (dry weight). Most Cannabis enthusiasts know hemp as the plant that doesn’t get you high or has no-intoxicating properties. It has industrial uses such as rope, food, clothing, housing materials, paper, and more. It’s been at the crux of many innovations and inventions, along with moving mankind forward in history.

However, the term “marijuana” has some upsetting history, one that emerged as a result of anti-Mexican sentiments that were widespread during the early 1900s. Negative perceptions about “marijuana,” which was loosely being used as a broad term for all Cannabis plants, developed during this time. Anti-Mexican perceptions transformed into actual anti-marijuana laws, as states one-by-one began falling for the racist propaganda.

Cannabis prohibition was in full swing after the Marihuana Tax Act of 1937, which has led us to where we are today.

The Taxonomy of Cannabis

Well, so far, we’ve established one singular difference between hemp and marijuana: the amount of THC contained in the plant. In other words, is there enough THC to intoxicate a user?

However, that’s just not how Cannabis works — or the classification of any plant for that matter. Simplifying a species down to whether or not it may get a user high is not an accurate representation of the actual plant taxonomy.

As a genus, it contains a wide variety of species — not just marijuana and hemp.

It’s for this very reason that so many law enforcement professionals have trouble distinguishing hemp and marijuana, as they can look identical. Hemp is legal, while in some states, marijuana is not.

The issue of people not understanding the differences between marijuana and hemp really comes down to miseducation. Marijuana isn’t an ancient term; it’s fairly new. It’s also not a term that differentiates the species from one another. Cannabis is a term that accurately describes all of the various species that we’re talking about. However, it will take a lot of time before the cultural understanding of marijuana and hemp reflects that of the taxonomy.

Differences Between Hemp and Marijuana

The main reason why it’s important to understand the difference between marijuana and hemp is that there are both legal and effect distinctions that require some knowledge.

The 2018 Farm Bill exempts hemp from a controlled substance, which means states that do not allow the recreational growth of marijuana can still grow hemp and extract CBD for CBD-related products.

CBD derived from hemp can come in a wide variety of forms. Whether it’s hemp lotion, CBD oil, or other various applications, CBD can be found in a myriad of products that can benefit users without intoxication.

It may be difficult to wrap our heads around because the topic of marijuana vs. hemp can be quite confusing and a bit convoluted. However, we hope this article was able to explain some of the more challenging areas of distinction.

Unfortunately, the terms hemp and marijuana are not really going to leave our North American vernacular anytime soon, but with enough education and the shifting landscape of the Cannabis legislature, hopefully, the future will shed even more light on this incredible genus of plants.